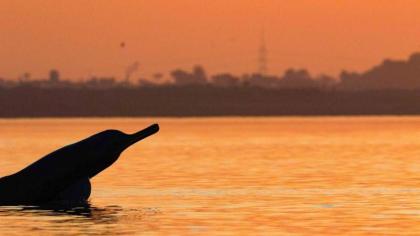 MUZAFFARGARH, (Muzaffargarh.City – 16th Dec, 2021 ) :Wildlife department has ordered an inquiry into death of a Blind Indus Dolphin, an endangered specie, at Taunsa Barrage in Kot Addu tahsil of district Muzaffargarh, an incident that triggered protests by NGO activists working for wildlife protection.

President of a local NGO working for aqua life protection Allah Bakhsh said that a blind Indus dolphin was caught in the nets during fishing by contractors a few days back. The dolphin died. However, those who caught it threw it back into the waters instead of handing it over to the authorities concerned, he added. He said that the NGO activists then brought the dead dolphin back and staged protest.

The endangered specie attract a large number of visitors to Head Taunsa Barrage from across the country in hope a glimpse of the innocent, beautiful and playful creature once it emerges from the river for breathing, said NGO secretary Khizar Khan.

They complained that fish netting contractors and illegal poachers routinely catch fish from head Taunsa by nets. Sometimes they also employ cruel tactics of releasing electric current into the water that kills whatever aqua life that come in the way.

Local youngsters including Asghar, Rasheed, Imran, Akbar, Khizar and others who participated in the protest, said that aqua life was a beautiful part of nature and the departments concerned must take steps to protect it.

They demanded immediate steps to stop recurrence of such incidents in future.

Regional Director Wildlife Dera Ghazi Khan Naveed Tariq said that higher authorities had deputed a deputy director level officer who has completed inquiry into the incident. However, he added, he himself also deputed an assistant director to probe the matter and submit report.

He said such incidents occur scarcely adding that since this dolphin is blind it has sensors that forewarn it of something dangerous or obstacles in the way. He said that the dolphin comes on the surface after every two to three minutes to breathe and this dolphin, after getting caught in the nets, might not be able to do so and died.

118 Criminals Nabbed In Muzaffargarh In A Day