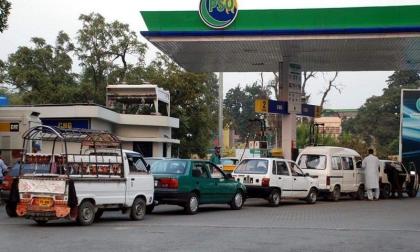 MUZAFFARGARH, (Muzaffargarh.City – 4th Jun, 2020 ):Shortage of petrol and diesel continued on the fourth consecutive day in Muzaffargarh district causing problems for the people on Thursday.

People were visiting different petrol pumps but failed to find fuel to run their vehicles.

President Kot Addu Petroleum Association, Muhammad Farhan, however, said that there was no shortage of petrol and cited recent statement of MD PSO in this connection.

He attributed the shortage to the opportunists oil depots and wholesale dealers who he claimed leave petrol pumps dried and instead selling fuel to illegal oil agencies at higher price.

People are now forced to buy petrol and diesel from illegal oil agencies after paying Rs100 extra for a litre.

Farhan said that wholesale dealers neither have license nor Ogra acknowledged them. They buy petrol in the name of invoices from petrol pumps and then sold it at higher prices to illegal oil agencies where people are forced to buy it at Rs165-200 per litre.

He said not a single petrol pump, out of total four in Kot Addu city, had petrol or diesel but oil agencies had enough fuel to sell at exorbitant price.

He demanded of the government to take action against elements involved in the POL shortage scam.