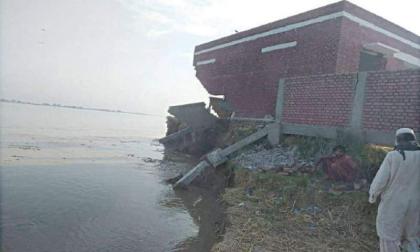 Villagers namely Karam Dad, Allah Bukhsh, Malik Manzoor, Raheem Bukhash and some others talking to APP stated that the river erosion was in progress for last many years.

Now, the erosion was severe as it caused huge losses. They appealed Punjab government to strengthen RD-3 Spur embankment . Delay in reconstruction of spur cause destruction of a nearby village, they feared. When contacted Irrigation Department officials, Sub Engineer Hafeez Leghari stated that Irrigation Department had written a letter to Authorities concerned for availability of funds.

He maintained that the spur embankment would be reconstructed as early as possible after release of funds.