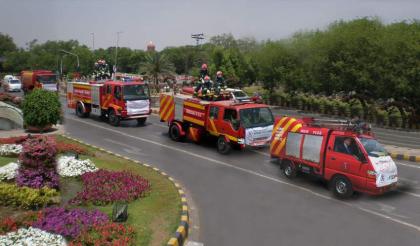 Rescuers Fight For Excellence In Duty

MUZAFFARGARH, (Muzaffargarh.City – 29th Sep, 2020 ) :Rescuers from Muzaffargarh, Dera Ghazi Khan, Layyah and Rajanpur districts joined a skill proficiency test to finalize a team for participation in the 9th National Rescue Challenge to be held in Lahore, officials said on Tuesday.

The exercise was organized at DG Khan on the orders of DG Rescue 1122 Punjab Dr. Rizwan Naseer (Sitara-e-Imtiaz) and Muzaffargarh rescuers turned out to be swifter and efficient.

The Muzaffargarh team led by district emergency officer Dr. Nayyar Alam won the contest by demonstrating their swift response and proficiency. Rescuers from DG Khan were runner up while those from Layyah and Rajanpur grabbed third and fourth position respectively.