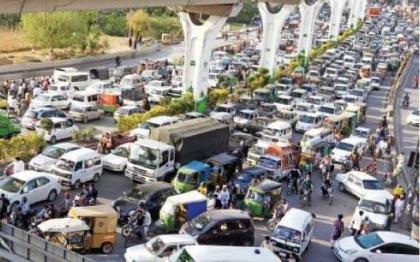 MULTAN, (Muzaffargarh.City – 21st Oct, 2022 ) :Pakistan Tehreek-i-Insaf’s protest against its chairman, Imran Khan disqualification by Election Commission of Pakistan in Toshakhana case Friday threw traffic out of gear for hours on both sides of the ‘Chenab’ bridge in Muzaffargarh.

Long queues of vehicles compounded the problems of the public coming from and to Multan at the bridges due to protesters who blocked the Muzaffargarh-Multan road on Friday evening.

‘ I’m going to Muzaffargarh along with family by car and have got stuck at the bridge., told Muhammad Abbas, a PBC employee to APP by phone.

He informed that vehicular traffic was blocked and he could see bumper to bumper cars and other vehicles on both sides of the Chenab bridge for the last three hours.

Abbas deplored that the protesters had caused great problems for the travellers.

When contacted a spokesperson for Muzaffargarh Police, Wasim Gopang stated that DSP traffic Wasim Ijaz held negotiations with the protesters and convinced them to clear the main artery.

He maintained that traffic started moving at the bridge after over three hours blockade.